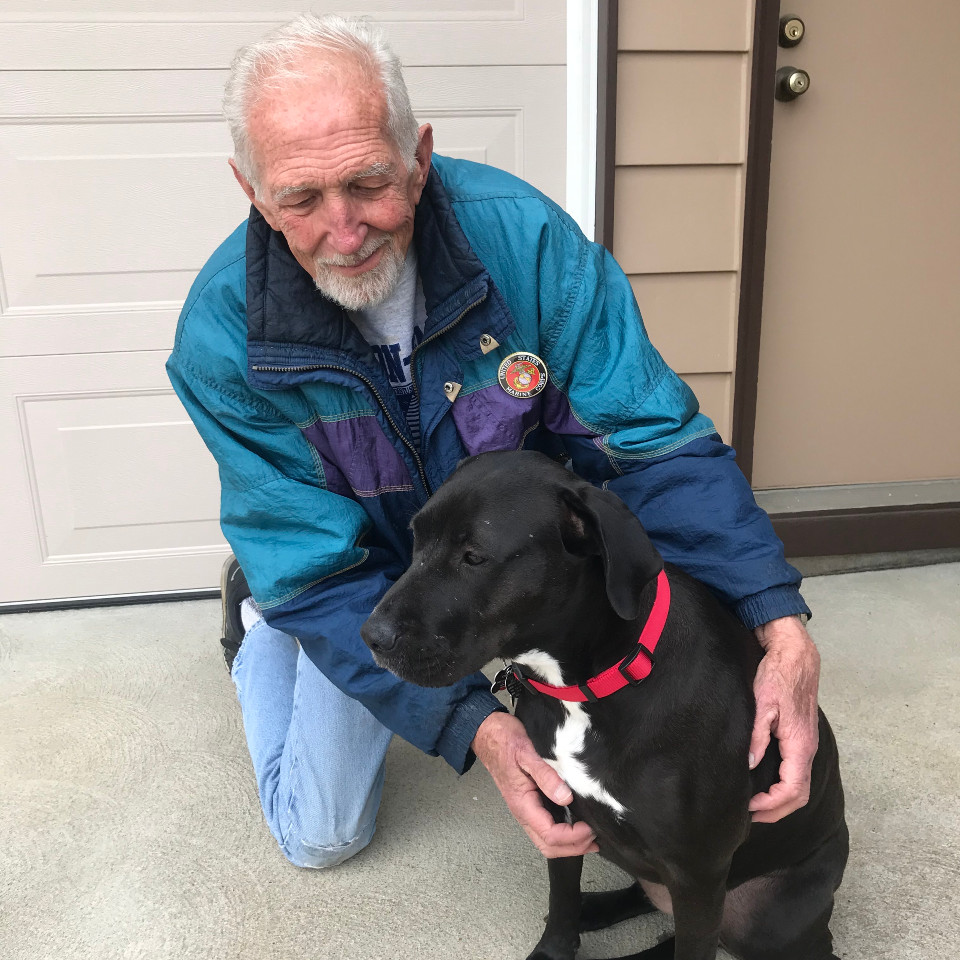 "Robert, a retired military veteran, counts on his service dog, Shadow, for constant companionship and support. Because Robert is on a fixed income, providing Shadow with the veterinary help she needs, such as vaccinations and parasite control, is difficult. You can get involved and make all the difference!"

Robert is a retired military veteran living just outside Cleveland, Ohio who made a lot of sacrifices—such as being away from family, friends, and the comforts of home—while he served his country. To the outside world, he’s fine, but his family and friends know he suffers from PTSD. His service dog, Shadow, is a black, 2½-year-old Labrador retriever–border collie mix. The second he saw her, it was love at first sight for both of them. She ran to him and showered him with wet doggy kisses. He learned that she came from Fort Worth, Texas, as a rescue. As a trained service dog, Shadow gives Robert love, companionship, loyalty, and support 24/7. She also calms him when he’s out and about. He never knows when his PTSD might be set off, but he does know that she’ll be right there next to him to make sure he feels calm and safe. She gives him so much joy, too. They love going on long walks and playing fetch.

While Robert and Shadow might look like they’re doing pretty well, Robert’s financial situation isn’t so great. He lives on a fixed income, and there are times when he chooses to make sure she has enough to eat before he gets food for himself. Those Meals on Wheels he gets are supposed to be for him, but he can’t help giving most of them to Shadow. He feels responsible for her. Some people have told him that he looks awfully thin, but he’s more concerned with keeping his beloved Shadow healthy. Robert clearly deserves to be able to keep her.

He knows it’s important for Shadow to see a veterinarian regularly. One of her vet’s worries is that pets, especially those who loyally serve their owners, will get sick because they’re not vaccinated against preventable diseases or because they don’t get medication to prevent them from getting parasites. (As an animal lover, it’s hard for me to imagine not being able to take my pet to a veterinarian.)

Robert is still on the waiting list to get Veterinary Care Vouchers from One Health Organization. He wants the peace of mind of knowing he can provide for Shadow as she provides for him. He’s grateful for the chance to apply for the Vouchers. He’s also grateful for the donors who care about people like him and pets like Shadow!

Shadow and Robert are counting on caring people like you to help keep them together as a family. Please consider donating today to give Robert peace of mind and to give Shadow her best chance of living a long, healthy, and happy life with Robert.