Why I made a donation in memory of my dog Maximillian 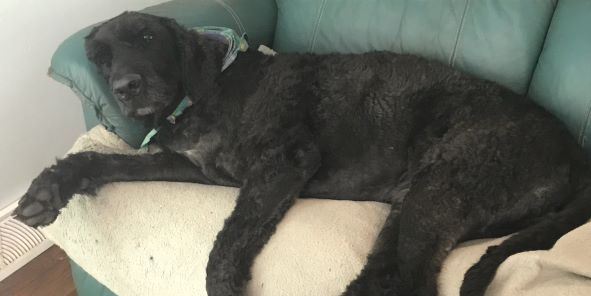 "How I turned my tragedy into a story of hope for someone else."

A cuddly bundle of wavy black fur with enormous paws arrived at my home shortly after he was weaned and quickly expanded to 110 lbs. of lumbering bear-like grace of domineering affection; the fullness of his half standard poodle, half-giant schnauzer heritage. We enjoyed the companionship of each other for a full twelve years; an amazingly long life for a deep-chested dog, but in the end, death befalls even the most beautiful of pets. This is his short story.

There's more to his story. An ad in the Plain Dealer lead me to a woman who bred Schnoodles (a cross between a Schnauzer and a Poodle). Mostly out of curiosity, I visited her and saw her litter of newborns. Since all puppies are cute, and Schnoodles are the cutest, I immediately wanted one. The breeder begged me to take Maximillian because, as she explained, he would be too large and too much like a giant Schnauzer and her perspective customers would want poodle-like puppies. So, I returned to pick him up at eight weeks old. He joined my household of four Standard poodles, fearless and self-assured from the beginning. At a Christmas party, I asked my guests to name him. One of my buddies proposed Max because of the Schnauzer German origin. I then decided that Max was too common, but that Maximillian had an air of dignity, command, and leadership. And so, his presence in our household began. Within six months he was the lead dog, but no one objected for everyone loved Maximillian, my 110lb. gentle bear with a bark so deep and so powerful that his authority was never challenged.

Upon reaching 10 years of age, Maximillian started having trouble walking. During his final two years, his arthritic rear legs became more troubling. The medication at a cost of over $8.00 per day was a godsend to extending his life and making him more comfortable. It permitted him to raise his large body and to walk. He had numerous visits to his veterinarian. I did think to myself, “WOW! That vet bill was HOW much?????” Fortunately, I could afford this unpredicted expense; many pet owners are not so lucky. And so, in Maximillian’s beautiful memory, I am saddened to think that some loving innocent pet that was as loyal as Maximillian might have their life ended too early merely because of finances.

That’s why I donated to One Health Organization. I invite you, a caring pet lover, to do the same.

Why should you consider donating? If you believe all pets deserve to live in the fullness of their years and you further believe each pet owner should be able to provide the needed care, nutrition, and medication for their pet’s happy and healthy life, then you should realize, many dear pets need your financial assistance, especially in those declining expensive senior years.

Donate!! You can help all pets live to the fullness of their lives.