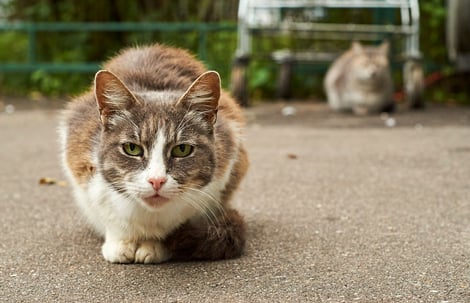 Have you ever seen a scruffy‑looking cat slinking around your neighborhood and wondered what their story is?

Is it a wandering pet? Or a free‑roaming feral cat?

Should you feed the creature? Or contact animal control or a rescue organization?

Life on the streets is tough for cats, and millions of abandoned and feral cats die young after suffering from disease, malnutrition, starvation, and abuse.

If they make it to a shelter they are often deemed unadoptable and are euthanized.

But humane organizations, veterinarians, and wildlife conservation groups are making a concerted effort to reduce the population of free‑roaming and feral cats.

One problem is that they don’t always agree about the best solution.

If you know or live with a pampered housecat you know that these critters can live long happy, healthy lives indoors. With a balanced diet and exercise, they thrive and make excellent companions.

But free‑roaming and feral cats, the offspring of stray or abandoned pets, live short, brutal lives. They face health challenges, and they can upset a delicate ecological balance.

Some of them experienced so much trauma or are so well adapted to the outdoors that they can’t adjust to living indoors. With too many animals languishing in shelters, these scaredy cats are not the adopters’ first choice.

And one of the biggest problems: They breed quickly and prolifically. Some experts estimate that 35 million feral cats live in the U.S.

We can all agree that’s too many cats fending for themselves, but not everyone agrees about what to do with the cats living and roaming the streets and forests.

Cats are hunters, and they will do what they can to feed themselves and their offspring. Millions of feral cats are definitely a disruptive force, killing hundreds of millions of rodents, reptiles, amphibians, and fish. They also hunt birds, although not everyone agrees about the extent of the damage.

Many scientists believe that habitat destruction by humans is a larger factor in the decimation of bird populations than feral cats.

Some wildlife organizations advocate for removing all feral felines and taking them to shelters or private sanctuaries. But there is not enough space for millions of cats, and certainly not enough people willing to adopt them. The ASPCA reports that 530,000 cats are euthanized in shelters every year, and feral cats probably make up the majority of those killed.

The American Veterinary Medical Association (AMVA)  believes it is possible to reduce the number of free‑roaming abandoned and feral cats in a humane and ethical manner. There is not a one‑size‑fits‑all solution. Any measures taken to control the population should consider the cats’ welfare in addition to their impacts on the environment around them.

Managed colonies of feral cats are groups of cats that are left to live outdoors. But their risks to public health, wildlife, and ecosystems are reduced by taking a number of steps. They are fed nutritious food, vaccinated, and—importantly—spayed and neutered so the size of the colony shrinks over time. Sick cats are euthanized, and healthy kittens are adopted into homes. The AMVA’s position is that the organization does not oppose euthanasia if the goals for the managed colony are not being met.

Trap‑Neuter‑Return/Release (or TNR) is a related strategy. It’s when a whole colony of feral cats is captured in live traps, vaccinated, and sterilized. Often, the veterinarian will clip a tip of their ear off as a way of indicating that the cat doesn’t need to be trapped again (called ear‑tipping). If you’ve ever seen a clipped ear, that’s probably why.

Wildlife advocates are not fans of these strategies because feeding stations attract disease‑carrying animals, posing health risks to humans and domesticated animals—and because even sterilized animals hunt wildlife. On the other hand, many committed organizations believe TNR and managed colonies are the most humane ways to provide decent living conditions for the millions of cats who would otherwise reproduce, transmit disease, and face euthanization.

Veterinarians and organizations that support TNR methods are also hoping that a sterilization vaccine can be developed to reduce the cost of surgeries for so many animals.

The AMVA also has some advice for pet parents who want to keep their pets healthy: Keep the kitties in!

Should I Let My Cat Roam?

The AMVA wants to educate pet owners about the dangers of allowing cats to roam freely outdoors. They remind us that so‑called owned pets (Don’t they own us?) should be confined indoors or in an enclosed outdoor space, or taught to walk on a leash. And yes, I’m aware that not all cats are interested in leashes and harnesses. I’m not a huge fan of walking cats outdoors, for several reasons. One is that they are then exposed to mosquitos that might give them heartworm (even one worm can kill a cat), and the other is that many cats aren’t really motivated to want to walk as far or as fast as you may want to walk.

Letting cats roam can have a negative impact on local wildlife and exposes them to diseases and parasites.

In many places, it’s against the law to let your pet roam freely—even if these laws aren’t enforced.

Some cats, despite our best efforts, become “door dashers” and get out anyway. Microchipping is one way to make sure that your cat will be returned to you if they are lost.

If you are being visited by a cat that doesn’t appear to have a home, you should contact your local animal control officer or an organization that has a humane policy for capturing, spaying, and neutering feral cats.

And, as always, if you have questions about free‑roaming and feral cats, or how to have your cat live a healthy life indoors, you can always ask your veterinarian. 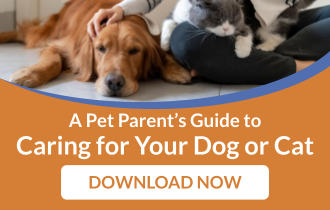