How a cat named Heru changed my life 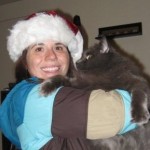 Looking back, the writing was on the wall. I knew at a very young age that I would work with animals. I had a challenging childhood. My father had a stroke a month before I was born and passed away when I was seven, so my environment (though loving) was somewhat chaotic. I was shy, sensitive, and unable to express the strong emotions that I felt to other people. So I turned to our dogs, two Scottish terriers, Angus and Maggie. I loved both, but bonded more closely to Angus. He was big, somewhat overweight, cuddly, gentle, and easy going. I felt safe, loved, and accepted in his presence. My relationship with him was the first of many that led me to a career in the field of the human animal bond.

My work in animal welfare was simultaneously the most fulfilling and hardest work I have ever done. It was most fulfilling because it was aligned with my passion to protect and advocate for non-human animals and the hardest because I saw cruelty, miscommunication, and misunderstanding between human and non-human animals. Most people had good intentions. A few did not and unfortunately this is what often sticks with you.

I had been working with dogs at the shelter for a little over a year when I met Heru; a beautiful, gray Maine Coon cat. I was running owner surrenders, providing adoption counseling, medical support, training and various other things. It was a gratifying, but exhausting and I was starting to feel burned out. Heru came into the shelter as a transfer from another shelter. He was surrendered there by his first owner who said he was too overweight and should be euthanized. The people who worked at the shelter agreed that would happen if he stayed so they transferred him to us.

Heru made an impression on everyone he met; I was no different. I saw that he was a sweet loving soul, much like my first dog, Angus. Even though I had seen the effects of neglect and mistreatment on other animals, I was shocked to learn that Heru was severely neglected by his previous owner. I think it was surprising because he was still so loving and trusted every person he met. It’s just who he was - all love. The neglect did take a toll though and had visible effects, most notably his weight. He could hardly move and was only motivated to get up for food. He was placed in the volunteer office so that he could interact with more people and have space to move around. The cat kennels were too small for him (he was close to 30 pounds) and he needed to lose significant weight before he could be medically cleared for adoption. The veterinarian hoped being in the office would be enough incentive to get him up and losing weight but it wasn’t.

I fell in love with Heru in that office, visiting him became my favorite part of the day. I used to take breaks in there from time to time; however; my visits went from occasional to daily after meeting Heru. I found out he was put on Prozac, an antidepressant, as a final attempt to lift his spirits and get him moving. A month went by with no progress before I decided that I had to foster him. I wasn’t sure if it was more for him or for me, now I know that it was both. I helped him lose weight, he learned how to jump and play (two things he didn’t do at first). I gave him the best possible life I could and he brought me back to life. Part of me had shut down when I was young and I didn’t know it until I met him. I knew that Heru had been through so much, but I saw that it never stopped him from trusting and loving fully. He taught me how to open my heart again. You just never know who is going to change your life. In my case, it was a beautiful, gray Maine Coon who went by the name of Heru.