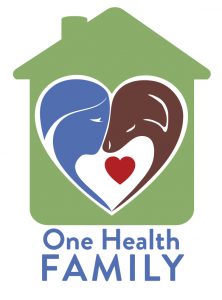 One Health Organization started out as "The van Bakeren Foundation" when Founder Dr. Anna M. van Heeckeren and her husband Edward B. Baker (aka Ned), an environmental consultant working at EnSafe, together with clinical veterinarian Dr. James Prueter from Shaker Animal Clinic incorporated the organization July 3, 2008.

Dr. Anna also wanted to create a campus-like setting where the work to be accomplished would entail research, education, and comprehensive veterinary care services modeled after the relationship that Case Western Reserve University's School of Medicine has with University Hospitals. The only difference would be that the focus would be on animal health as the critical component of the One Health triad.

Since there was no single direction she could take to get there and with limited financial resources at her disposal, she was instructed to start small and grow from there. Based on her experience at Case Western Reserve University and University Hospitals, in addition to her Board experience at the American Veterinary Medical Foundation, she knew the importance of a strong administrative backbone. Unlike most non-profit organizations, she did not start with a single program and then worry about administration and organizational infrastructure later. Instead, she got a team to build the administrative infrastructure and then developed programs along the way.

The first order of programmatic business was to develop an online presence to discuss One Health issues and start blogging. Then, it was deciding the focus.

The first research project involved the zoonotic disease roundworms that can infect animals and accidentally infect people. It was discovered that while this is a big medical problem in underdeveloped countries (and considered a neglected tropical disease by the Centers for Disease Control and Prevention) that in the United States the problem is quite small (even though nearly 14% of people in the US have been exposed to this parasite).

However, this research led to the discovery that there are certain people who are more susceptible than others to accidentally getting diseases from animals (i.e. zoonotic diseases) than others. We call these people YOPIES, which stands for:

Therefore, it was decided that these are vulnerable populations that needed our support.

Since dogs and cats are the most common pets in the US, these animals are our initial focus for program development.

Older adults and people with disabilities frequently have a strong and positive 'Human-Animal Bond' and experience financial hardship, so these people are our initial focus for developing programs.

Since most people encounter pets in their homes, these environments are our initial focus for program development.

We hope you share our enthusiasm for this important work and want to join our cause as a One Health Team Member.